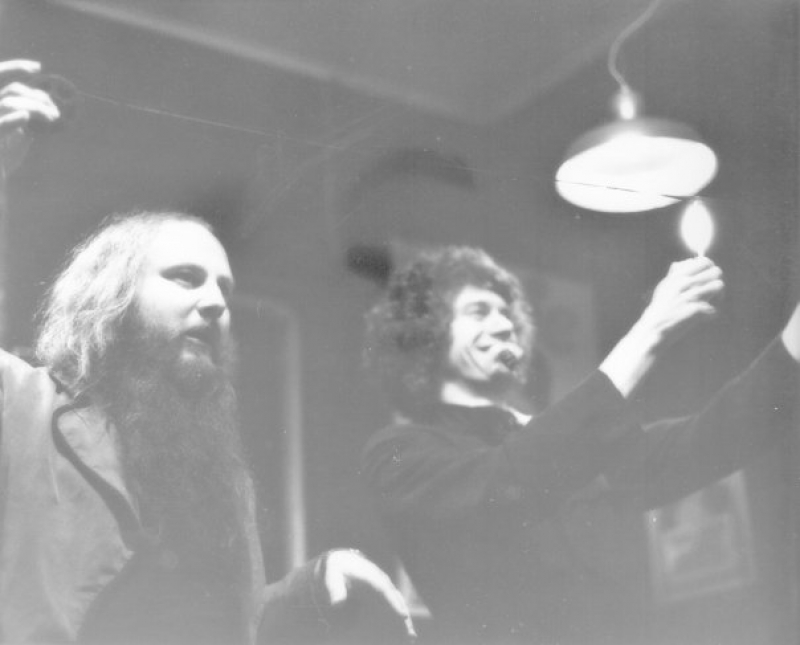 Spears and Tonto - stars of "Africa : the Savage Musical"

After Barry finished the third season of Jesus Christ Superstar he auditioned for Africa : the Savage Musical written by Australian playwright Steve J. Spears. The cast included Steve J. Spears, Rodney Bain OBE (aka Felix b. Tonto), Rod Smith, Glenda Lum and Pam Miller (later a member of pop band the Ferrets) with Peter Inglis as musician and the show toured university campuses in 4 states. It was a savage look at the plight of indigenous Australians by drawing a parallel with South Africa's apartheid and featured some very catchy songs, slapstick and physical satire.

Steve J. Spears was born on January 22, 1951 in Adelaide, South Australia, Australia . He went on to write the hit play "The Elocution of Benjamin Franklin" starring Gordon Chater and became a regular writer for television soap operas. Always a radical and independent thinker here is Steve's obituary:

There was something touching and brave about the life of Steve J. Spears that flourished and grew when faced with death. It was a tenderness and an openness that fed the precocious talent that created an international hit play, The Elocution of Benjamin Franklin, with its painful scenes about an ageing cross-dressing elocution teacher who fell hopelessly in love with one of his pupils.

It was present in his rebellious and relentlessly daggy lifestyle and in the way he refused to listen to music made after 1978 because it was the year the Sex Pistols broke up. It was in his rejection of all things religious and spiritual, and in his inability to form permanent romantic attachments because he would become bored. It was also present in the way that most of these attachments became lasting friendships.

Spears, the gifted actor, musician, playwright, journalist and novelist who died at 56 and whose funeral service is being held in Adelaide today, was the son of Marcene and Eric Spears and grew up in Mile End, inner Adelaide. He attended Rostrevor Catholic College, where he developed an abiding hatred of religion. He dropped out of an Adelaide University law course after four years to pursue a writing career.

By the time he was 25 he had written two musicals, Stud and Africa, the play Young Mo about the comedian Roy Rene, and Benjamin, which was to become one of the most successful produced in Australia. First staged by the Nimrod in 1976, it toured nationally before seasons in London (where Spears became friends with the actress Joanna Lumley), San Francisco and New York.

The play was nominated for a Society of West End Theatres award, a London Evening Standard award, and won three Off Broadway awards and an Australian Writer's Guild Gold AWGIE. Identified with the career of the late actor Gordon Chater, it was recently revived starring John Wood.

His later plays included They Were Giants in Those Days, People Keep Giving Me Things, The Death of George Reeves and Those Dear Departed, which was made into a film with Pamela Stephenson and Garry McDonald. None achieved the place in theatre history occupied by Benjamin and Spears, who admitted to squandering much of the play's riches, struggled with the roller-coaster ride that flowed from spectacular early success.

He became a TV scriptwriter, for long-running series including E Street, A Country Practice and Hey Dad. But his creativity had full rein in children's film and television, bringing a swag of awards for series and tele-features, including The Genie from Down Under, The Big Wish, Mr Edmund and The Greatest Tune on Earth.