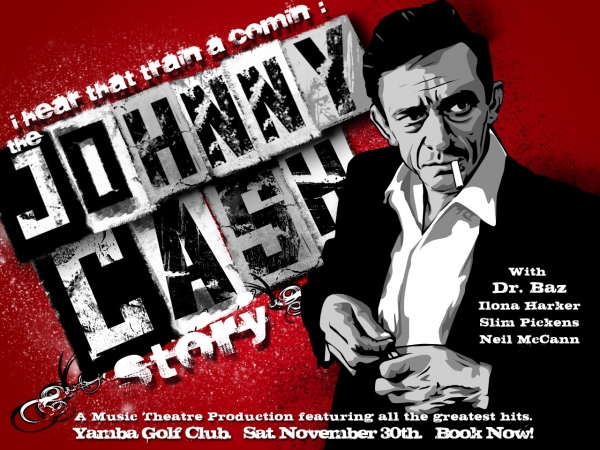 Barry has the vocal depth to emulate the unique Johnny Cash sound and the vivacious and versatile Ilona Harker plays the 3 women in Johnny’s life as she ‘hoots and hollers’ her way through this toe-tapping, side slapping mix of great songs and stories. 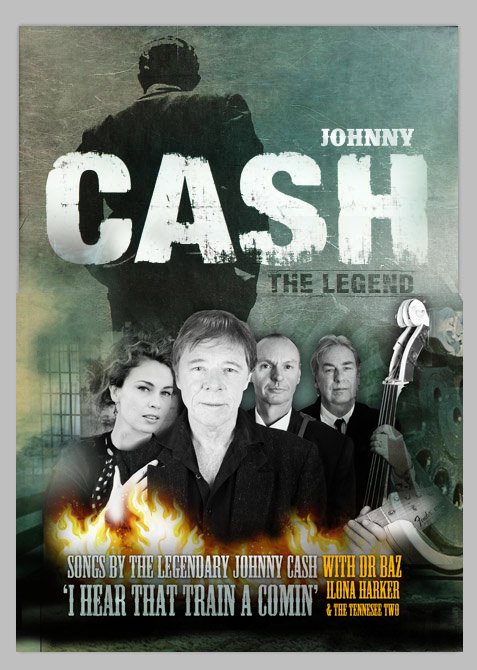 Johnny Cash covered songs by many of the greatest 20th Century songwriters such as Bob Dylan, Kris Kristopherson, and Willie Nelson and in later life he brough his unique authority to a later generation of song writers such 9 Inch Nails, U2 and Tom Petty, so the repertoire is extremely broad and interesting, including some of the greatest popular songs written over the past 60 years.

“I Hear That Train a-Comin’: The Johny Cash  Story”, with Barry Ferrier as Johnny Cash and Ilona Harker as “Mama” Carrie, first wife Vivienne, and shining as June Carter Cash, with authentic rockabilly backing by the Tennessee Two, (Marshall Grant, Bass, played by Slim Pickens and Luther Perkins , Electric Guitar, played by Neil McCann) - this is not just a bunch of songs , this is a music theatre experience... it’s great entertainment that appeals across the generations and is just a whole lot of fun!

Dowload the Press Release PDF            Play the video at the foot of this page to view excerpts from the Show!

Read about Barry's other music projects including his acoustic funk and blues Duo with Thrett Jones , his blues/funk band the Blue Starz, and his work with Slim Pickens & Dr. Baz

Excerpts from the Johnny Cash Show

View the embedded image gallery online at:
https://doctorbaz.com/index.php/barry-ferrier-projects/item/5-johnny-cash-tribute-music-theatre-show#sigProId11780bc7f4
More in this category: Johnny Cash Tribute Show »
back to top